Paying it Back, Paying it Forward

Karen Baetzel retired after a thirty year career as one of the Navy’s most senior female aviators and has dedicated her efforts to sharing the lessons of servant leadership and inspired living, both to pay it back and pay it forward.

She is one of the few Naval Aviators of either gender to qualify to fly helicopters, propeller and jet aircraft, amassing 2000 plus military flight hours in six aircraft types and serving aboard seven ships.

After her Commanding Officer tour, Karen attended the prestigious Naval War College in residence, earning a Masters Degree in National Security and Strategic Studies and was a visiting faculty member there.

Her last tour of duty was at the Offices of the Secretary of Defense at the Pentagon, where she was a military responder to such events as World Trade Center site of the 9/11 attacks and Hurricane Katrina.

After successful engagments in the corporate world, Karen went on to found her own business, BattleAxe Consulting Services in 2007, located in Miami. She now serves an international client base in leadership training and development.

She has co-authored or contributed to three books, including Stepping Stones to Success, coauthored with Deepak Chopra, Jack Canfield, and Dr. Denis Waitley, published in 2010 and Military Fly Moms published in 2012.

Karen is a plankowner member of the National Women Veterans Speakers Bureau.

From the youngest front line leaders to the corner office and C suite, Karen can sharpen your leaders.

Enter your name and email for the On My Frequency blog and the very occasional sitrep, weather report, manifesto and/or recipe. 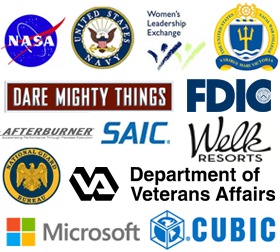